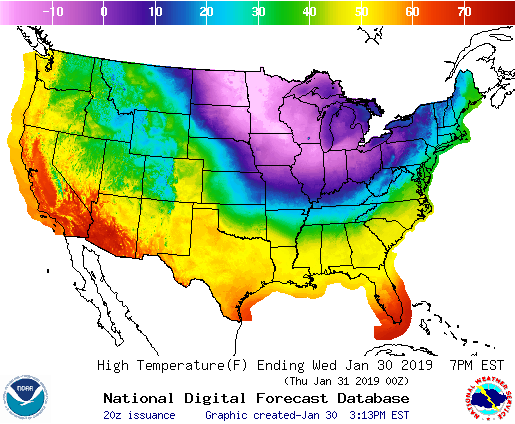 Is it really colder in parts of the US right now than it is on Mars? Let’s take a closer look.

The feeling of being cold is an indication that our body is shedding more thermal energy than it is generating. This overall transfer is a function of four of avenues of thermal transfer operating together: radiation, conduction, convection, and evaporation.

We help the body maintain its temperature by controlling the environment around us. We sit by a fire for its radiant heat. We turn up the furnace to increase the temperature of the fluid around us. We wear insulating layers of clothing to limit the efficiency of conduction and convection. We do these things on Earth and we will do them on Mars. When it’s cold, we try to stay warm. How well will that work for us on Mars? It turns out, not too badly, despite the lower environmental temperatures.

On Earth, we have developed a measure of perceived environmental temperature that takes into account the convective effects of the wind. We call this wind chill equivalent temperature (WCET) and we are all used to seeing it on our evening news. In a paper published in the Bulletin of the American Meteorological Society (Osczevski, 2014), the author applied this idea to develop a measure of perceived temperature on Mars called earth equivalent temperature (EET), which takes into account the much lower air pressure and different composition of the Martian atmosphere. The results are startling.

As I type this, much of the US is experiencing record low temperatures as the polar vortex dips inordinately far south. In Minneapolis right now, the ambient temperature is -28°C (-19°F) with 32km/h (20mph) winds, resulting in a WCET of -39°C (-38°F). In order to experience the same degree of thermal heat exchange on Mars, the temperature there would have to be -80°C (-112°F) with winds of 90km/h (56mph). These conditions happen there, but not all the time.

In fact, the average annual EET of Mars is -16°C. The average winter WCET of Minneapolis is -15°C. So Mars is, on annual average, really only about one Celsius degree colder than Minneapolis in the winter!

Now that comparison isn’t really meaningful. After all, Minneapolis is a city with a regional climate. Mars is a planet full of regional climates. Let’s take a look at the weather Curiosity is currently experiencing in the summer near the equator of Mars. Today, Curiosity will see a high of -7°C (19°F). I couldn’t find current wind speeds, but typical summer winds are 9.6km/h. That makes the EET for Curiosity around 4°C (39°F) right now.

So, yes, it is currently colder in Minneapolis than it is for Curiosity on Mars, both in terms of ambient temperature and EET.