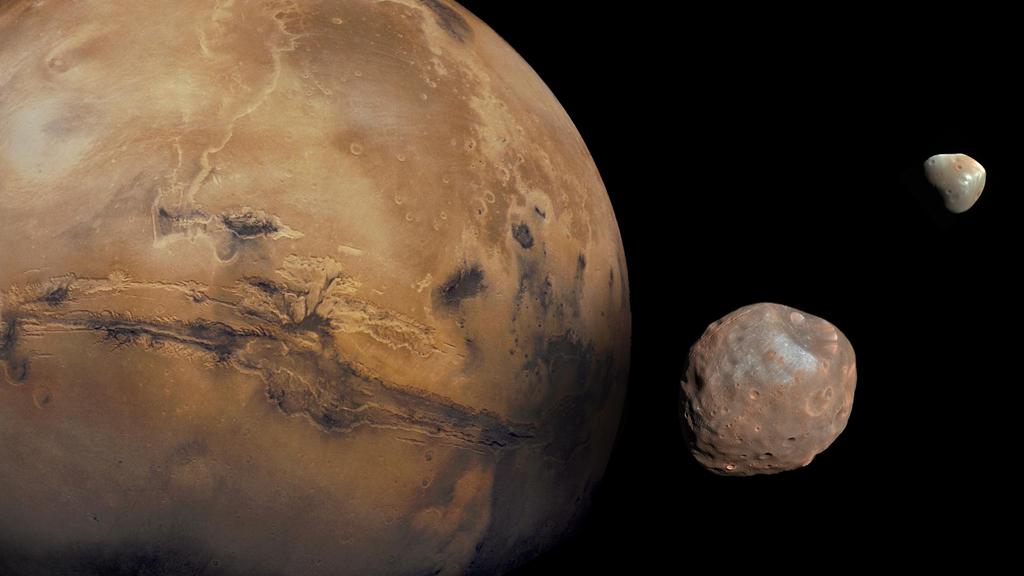 At first, the moons of Mars seem somewhat underwhelming as moons go. Small and misshapen, they don’t seem worth our attention. Still, since humans will one day look up at them and call them their own, maybe we should take a closer look at what that view will be like. We might find that they are more interesting than we expect.

Let’s start with Earth’s Moon, as a basis for comparison. The Moon is a sphere with a diameter of 3475 kilometers (2159 miles). It orbits an average of 385,000 kilometers (239,000 miles) from the Earth. Its orbital period (the time it takes to complete one trip around the Earth) is 27.3 days. The Moon always presents the same face to the Earth. The scientific term for this is “tidally locked” and it happens when a moon’s rotational period is equal to its orbital period.

Mars has two moons. The largest is called Phobos; the smallest Deimos. Both are irregularly shaped. We think they were originally asteroids, captured by Mars’ gravity. Like the Earth’s Moon, both are tidally locked, always presenting the same face to Mars.

Phobos is tiny, being only 22.5 kilometers (14 miles) across on average. Despite this, from the surface of Mars it appears to be about a third the size of the Earth’s moon. This is because it orbits Mars very closely, at about 9377 kilometers (5826 miles). Because the orbit is so close to the planet, Phobos moves very quickly, taking only 7 hours and 39 minutes to complete an orbit.

Deimos is even smaller, at 12.4 kilometers (7.7 miles) across on average. It orbits Mars at an average distance of 23,460 kilometers (14,577 miles). Because it is so much further away than Phobos, Deimos appears as nothing more than a particularly bright star from the surface of Mars. Its orbital period is 30 hours and 18 minutes.

Both Mars and Earth rotate counter-clockwise, as viewed from above their north poles. This is why the Sun rises in the east and sets in the west on both planets. The rotational period of both planets is very similar. A day on Mars is 24 hours and 37 minutes.

The Earth’s Moon orbits the planet in the same direction as the planet’s rotation. With its orbital period of 27.3 days, the Moon rises in the east and sets in the west, just like the Sun. It rises and sets about 50 minutes later each day due to its progress around its orbit (since the Moon has moved a little farther along its path, the Earth must rotate a little farther before the Moon is over the same point on the surface that it was the day before).

Phobos orbits Mars more quickly than the planet’s rotational period, taking only 7 hours and 39 minutes to complete an orbit. This makes it rather special, as it is the only moon in our solar system that does this. From the surface of Mars, this means that Phobos rises in the west and sets in the east, taking 4 hours and 15 minutes or less (depending on your latitude) to cross the sky. You could watch Phobos rise and set twice each day on Mars if you had nothing better to do.

The orbit of Phobos is slowly decaying as the gravity of Mars pulls it 1.8 meters closer each year. Eventually, in 50 million years or so, it will either crash into Mars or be pulled apart to form a ring around the planet.

Deimos orbits just a bit slower than the planet’s rotation, taking 30 hours and 18 minutes to complete an orbit. This means that Deimos rises in the east and sets in the west. But because its orbital period is so close to the planet’s rotational period, Deimos takes 66 hours to cross the sky. While Deimos is up, the sun would pass it twice. You could go to bed and get up and Deimos would still be up; two nights in a row.

The orbit of Deimos is slowly getting larger and, in time, this moon is expected to escape the gravity of Mars completely.

As a moon follows its path around its planet, one face is always lit by the Sun. How much of this lit area can be seen from the surface of the planet depends on where the moon is in its orbit. This is what causes the phases of a moon. A moon goes through all its phases in one orbit.

Since its orbital period is so long, relative to the rotational period of Earth, the Moon’s phases change each night.

The short orbital periods of both Phobos and Deimos mean that they would go through their phases much more quickly. The phases of both moons would change during the time they are up. We would see the shape of Phobos change during the four hours it moves across the sky. Deimos would go through an entire phase cycle more than twice in the 66 hours it is up. However, because of its small apparent size, this would only appear as variation in its brightness.

So, imagine yourself standing on the surface of Mars watching these moons: poor doomed Phobos, a shape-shifting blob zipping across the sky backwards; and Deimos, a bright star of varying intensity plodding along forwards, slower than the Sun yet gradually sneaking away. Seems like a pretty cool view to me.